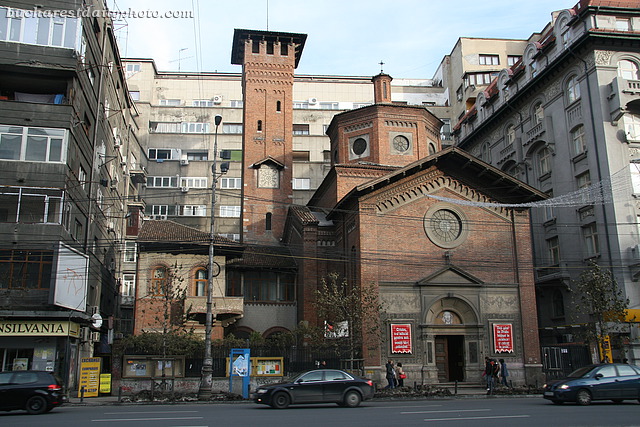 Even if my title didn’t spell it out, I don’t think it would have taken you more than a few seconds to identify this building. The campanile and the Lombard Romanesque style speak for themselves. The Italian Church of the Most Holy Redeemer is a Roman Catholic Church built in 1915-1916 using funds donated by the Vittorio Emanuele III, the Holy See, the Italian Embassy in Bucharest and the Italian community in Romania which in 1915 counted about 7000 people. It is the property of the Italian government and is located on the busiest boulevard in Bucharest, Nicolae Bălcescu. The architects were Mario Stoppa and Giuseppe Furaboschi. The first appointed priest, Antonio Mantica, served here until December 1949 when he was arrested by the communists and forced to live Romania. The newly appointed priest, Clemente Gatti, served until March 1951 when he also was arrested, sentenced to 15 years in prison and later deported. The church was closed until 1968 when it was opened with the occasion of a state visit by the Italian Prime Minister Amintore Fanfani. Following the visit, the church remained open, but only a few services a year were performed, on special occasions like Easter, Christmas, the Assumption of Mary etc. Finally, the Italian Church was reopened in 1989 after the Romanian Revolution. Services are held daily in Romanian, and on Sundays in Romanian, Italian and Polish. The parish house was added in 1924 and for a while served as the Italian school. The campanile is 27.75 meters tall and carries 4 large bells. The surrounding tall buildings were raised in the 1930’s altering the space around the church.

5 Responses to “The Italian Church”