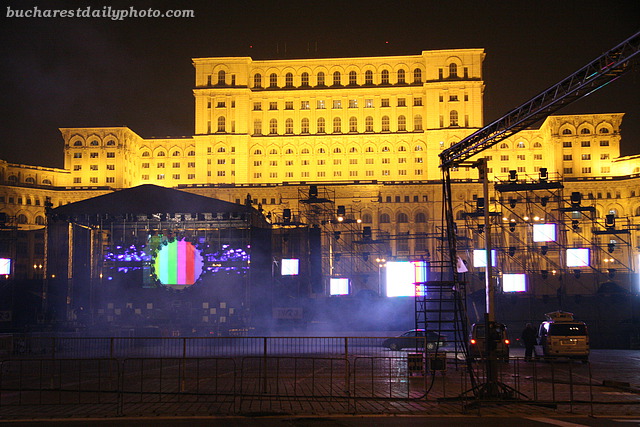 The stage for the New Year Party sponsored by Bucharest’s City Hall has already been installed in front of the Palace of Parliament, in the Constitution Square and was being tested last night when I passed by. Thousands of people are expected to attend the event and enjoy the music and the fireworks. The only drawback so far is that the weather forecast for tonight shows 20% chance of rain. I went to a New Year Party in the open air a few years ago and it was a nice experience. But this year I’ll be staying indoors and waiting for the arrival of the new year in the company of friends.

Happy New Year everyone and all the best in the new year! I see you in 2010 🙂 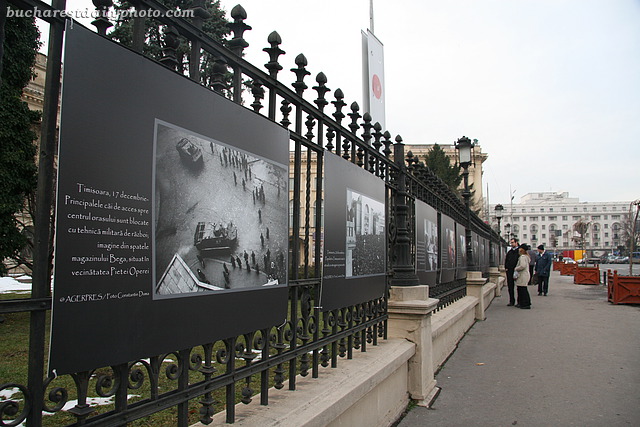 Another photo exhibition on the Romanian Revolution, this time outside the National Museum of Art (former Royal Palace). It includes photos from the archive of the National Press Agency Agerpres. 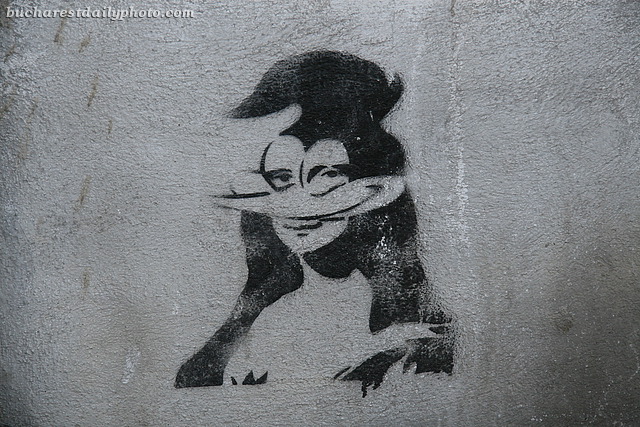 I’m not sure what the idea is here, maybe some sort of role playing. But is it Woody that plays Mona Lisa or the other way around? I think it looks interesting nevertheless. 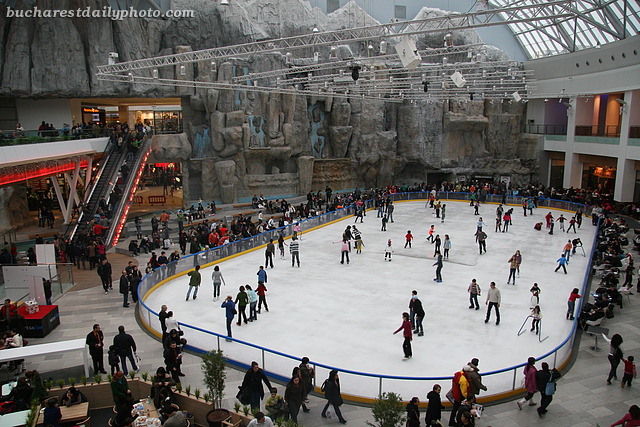 At the mall on a rainy late December day. 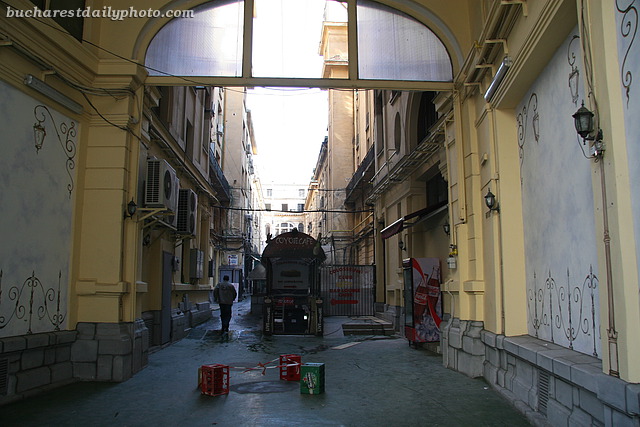 This is Victoria Passage, linking Calea Victoriei with Academiei Street. It appeared a lot in the news in the summer of 2008 when the press got word of plans to demolish two of the historical buildings located inside the passage. It was the same story as always, such a piece of real estate in downtown Bucharest would sell for a small fortune. So far the buildings are still standing. 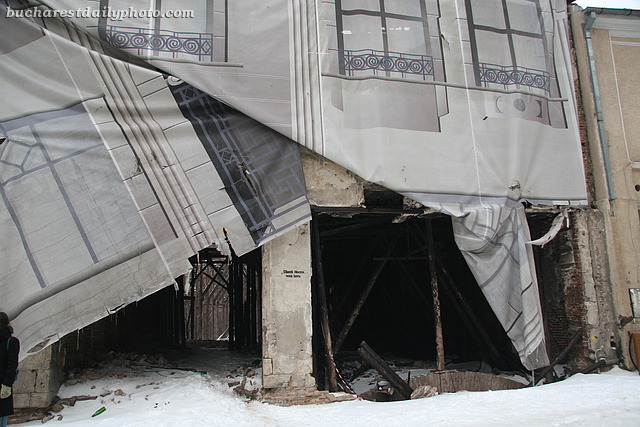 Apparently there’s a simple explanation for the fact that this building on Lipscani St. is in danger of collapsing. See below. 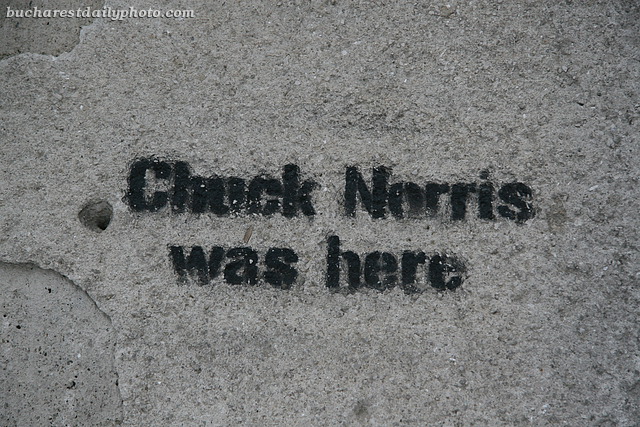 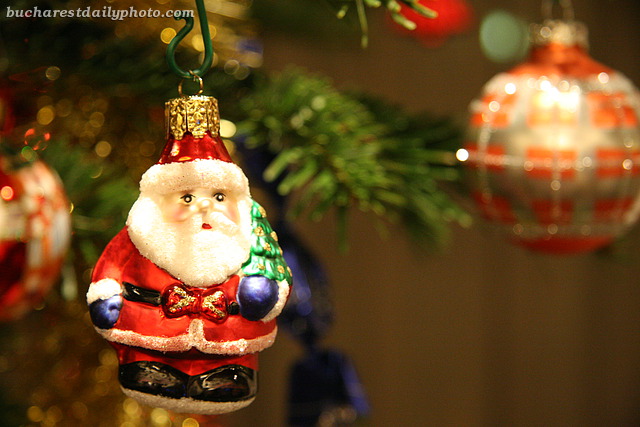 To all those who celebrate it, I would like to wish you Merry Christmas and a happy holiday season spent with your loved ones. Thanks for your support and encouragement over the last six months. 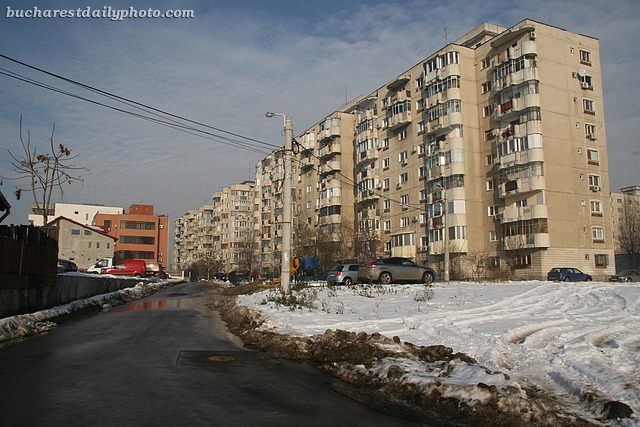 December 24th turned out to be a nice and sunny day, with clear blue skies as you can see from today’s photo. It looks like we’re gonna have a partially white Christmas as the snow from last week’s snowfall has melted away and created ugly mountains of snow and mud. 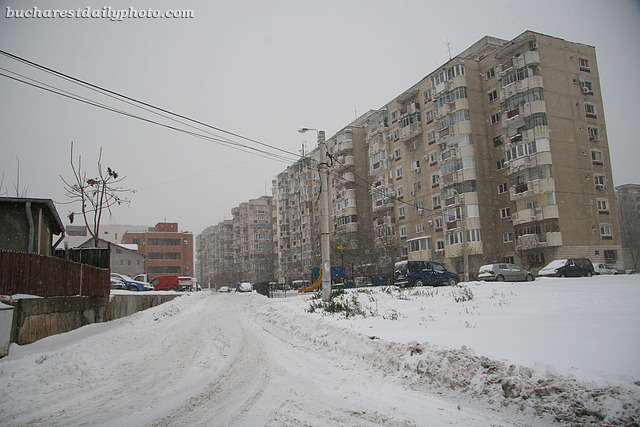 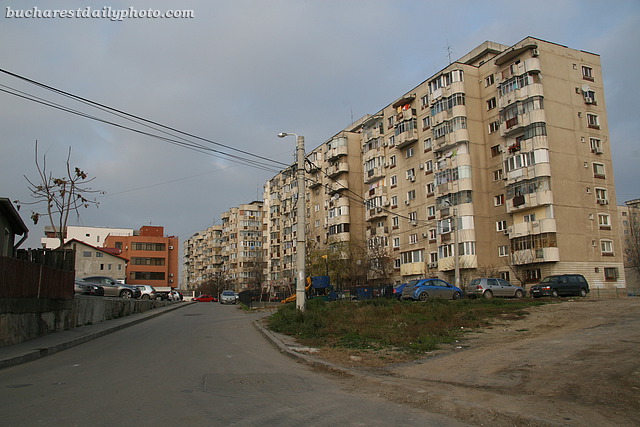 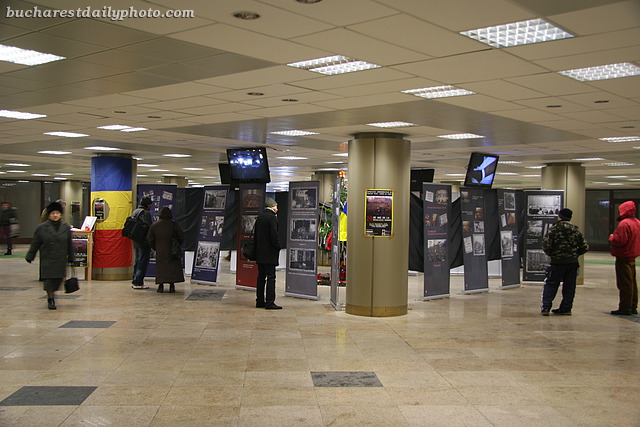 Because this year we celebrated twenty years since the Romanian Revolution, the media bombarded us with anniversary shows, images, articles etc, related to the subject. Twenty years have passed but unfortunately many Romanians feel that there are still unanswered questions related to the Romanian Revolution like who was responsible for shooting at the revolutionaries and what happened after Ceausescu fled. Many people believe that the revolution was the hijacked by the “humane” communists (as Mr. Iliescu who came to power after the Revolution tried to picture himself) and a few go as far as saying that it was more coup d’etat than a people’s revolution. Still 1104 people died for their believes, many of them anonymous and heroic citizens of Bucharest, and for this I will continue to call it a revolution no matter what happened at the top. But it is frustrating, the impression that you don’t know what really happened back then.

Today’s photo shows one of these commemorative events, an exhibition titled “This is what is was like in Bucharest… 20 years since the Romanian Revolution” taking place in the University Square underground passage. The exhibition contains photographs and short films from the streets of Bucharest December 1989, trying to capture the atmosphere of those days. 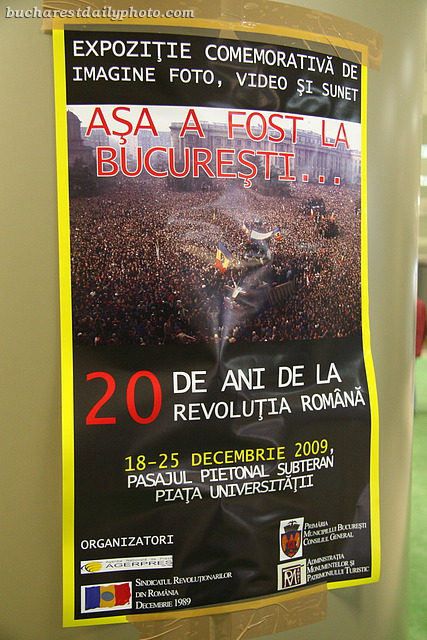 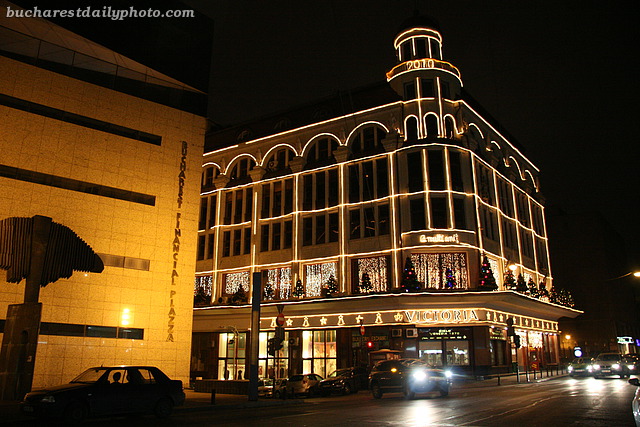 In an effort to draw customers inside, many stores have joined in the holidays spirit and decorated their facades with lights, Christmas trees and ornaments. Such is the case of the store in today’s photo, the Victoria Department Store on Calea Victoriei. Department store is a bit of a misnomer because last time I was inside it the store looked more like an chaotic indoor bazaar rather than a shopping mall. Once upon a time Victoria Department Store was called Galeries Lafayette, a modern store modeled after the great Parisians stores. When it was built, the idea of a “universal store” (as it was called at the time) was a new one in Bucharest where people were used to the small shops that stood right nearby on the area called Lipscani. It was built in 1928 in Art Deco style after plans made by architect Herman Clejan. Under the communists the store’s slogan was “Victoria Department Store, 50 stores in one” and this inspired one of the most famous jokes of the regime about a salami that was also called Victoria, whose slogan said the joke was “one salami in 50 stores” hinting to the lack of basic food during that time.