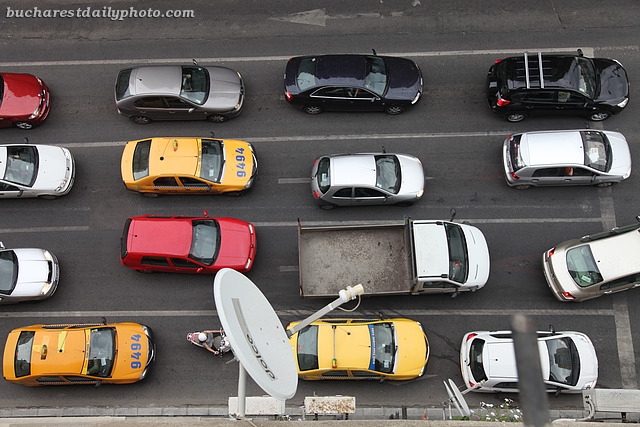 Or if you prefer, the street seen from a balcony.

Yesterday’s photo of Noah’s Ark was like a premonition, cause yesterday evening Bucharest has seen one of the strongest storms of this summer. Many streets were flooded and some cars were hit by falling trees. The rain caught me without an umbrella, downtown at University Square where I tried to find some means of transportation to Titan to meet some friends for dinner. Not that an umbrella would have helped much, the wind was so strong that umbrellas were useless. The bus closed its doors right in my nose and there was no taxi in sight. In the end my husband Cris came to pick me up and we headed for the restaurant. When we got there we realized Cris had forgotten the umbrella too so we spent the next 15 minutes in the car, 50 meters away from the door of the restaurant, waiting for a break in the rain – with no luck because it was pooring like crazy. The weather in Bucharest has been pretty moody this summer, with frequent violent storms.