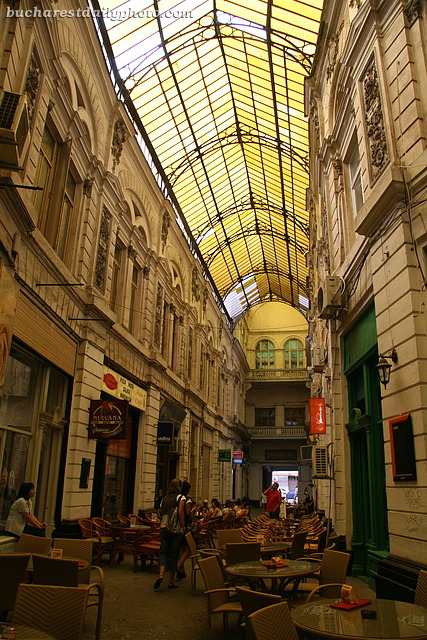 Vilacrosse and Macca are the two wings of a U-shaped pedestrian passage roofed with glass and wrought iron and lined with shops, cafes and restaurants. It’s one of the popular places for an outing with friends in Bucharest, the advantage being that you’re sheltered in case of rain but you’re still “outside”, in natural light. In this place you’ll find something for everyone: there’s are a couple of Egyptian cafes were you can puff at narghiles, a rock themed Blues Cafe with pretty good music, a Romanian restaurant, a French Bistro, even a Chinese restaurant. I’ve spend hours here sipping wine or drinking coffe and chatting with friends. It’s not easy to find an empty table on a summer evening. The passage was built in 1890-1891 after a design by architect Felix Xenopol. This elegant arched structure was probably intended to look French since this was back at the end of the 19th century when they aspired to transform Bucharest into “little Paris”, but the feel today is more Oriental than Western. During the communist period the passage was renamed Jewellery Passage (Pasajul Bijuteria) because the city’s largest jewelery store was located close by. It’s original name was restored in 1990.