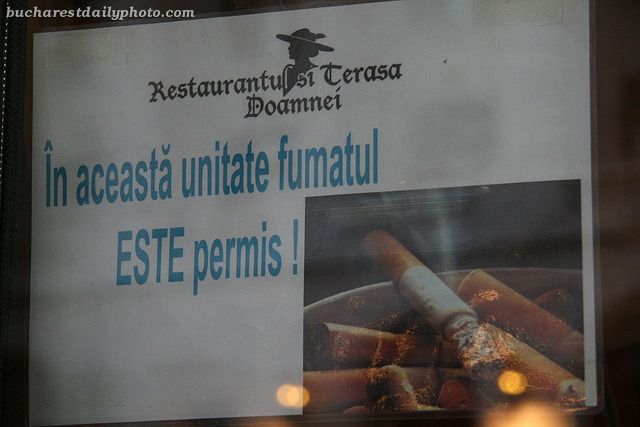 Bucharest is by all means a smoker’s paradise. According to some numbers I found on the web, in Romania some 45% of men and 25% of women smoke, but I wonder if the numbers are correct because it feels like the percentage is a lot higher, especially among women. Smoking is still seen as harmless and fashionable, people still think cigarettes are cool and a way to express oneself. I’ve seen many parents smoking right into the noses of their children, I’ve seen pregnant women smoke and I’ve seen doctors smoking on the hospital’s hallways. Some tourists find it really annoying, some find it liberating. Smoking is not allowed in most public places but … if the law is respected that’s another story. Since January 1st the new law regarding smoking in restaurants and cafes demands that smoking is only allowed in areas completely separated from the non-smoking section, the smoking area should not form more than 50% of the total area of the restaurant or bar, and should not be areas used for transit nor near the entrance. Restaurants and bars which have a total surface of less than 100 square meters can designate themselves as smoking or non-smoking venues and that should be clearly posted on the door. What was the result of this verbose law? Almost all restaurants in Bucharest declared themselves as “smoking establishments” just like the one in today’s photo. Posted on the door the message reads “Smoking IS permitted inside this venue”.

5 Responses to “A city of chainsmokers”