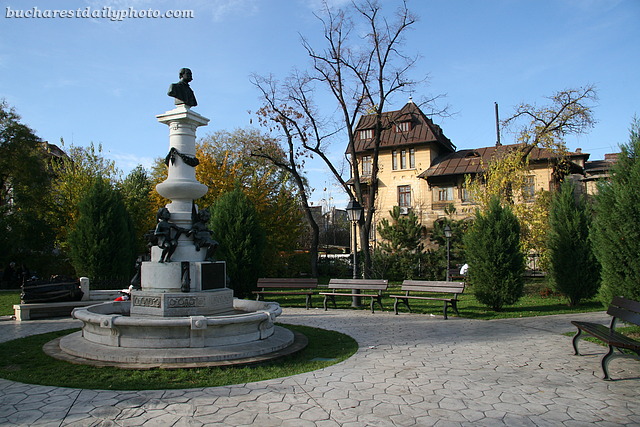 If one lives in a hectic city like Bucharest one tends from time to time to seek out the places of peace and quiet where one can take a short break from all the noise and the never ending chaos. That is why Bucharest’s parks are some of the favourite places to go for the city’s residents. While Bucharest’s bigger parks are all located in residential neighbourhoods, a bit farther away from the city center, small parks exist right in the center of the city. There’s Cişmigiu Park, which I already talked about, there’s Ioanid Park that I still have to show you, and there’s the little park that is the subject of today’s photo, which is called Cazzavillan Park. Located in a residential area, north of Ştirbei Vodă, at the crossing of Luigi Cazzavillan and Temişana and Transilvania streets, the park, set out in 1905,was completely renovated in 2005. The park bears the name of an Italian journalist, Luigi Cazzavillan (1852-1903), who came to Romania in 1877 as a war correspondent and decided to stay. At first Cazzavillan worked as an professor of Italian, but in 1884 he founded the newspaper “Universul”, which became one of the most famous and most influential daily newspapers in Romania. That is why, in the middle of the park you’ll find the little Luigi Cazzavillan fountain, made in the journalist honor, topped by Cazzavillan’s bust surrounded by putti. The fountain dates from 1905 and its author is sculptor Filip Marin (1865-1928). There isn’t a wikipedia page about Luigi Cazzavillan but on youtube I was able to find this short archive film showing a Romanian delegation that visited Arzignano (Vicenza) to honor the memory of the journalist.

7 Responses to “A green oasis”