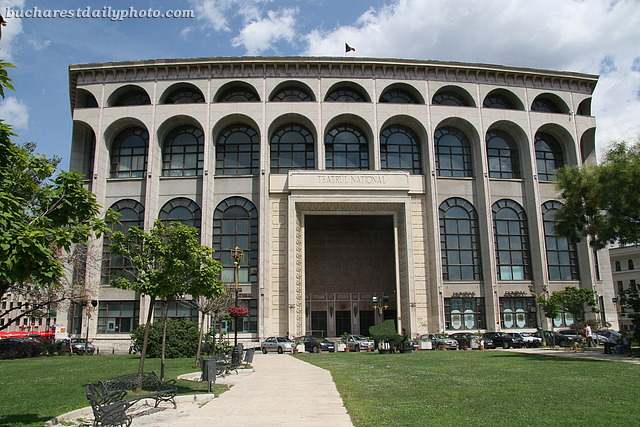 The theatre season has started in Bucharest. I love the theatre, it’s one of my favourite type of performing arts. That’s maybe because my mother used to take me to the theatre every week, when I was little. For me, the sadness of seeing summer departing is a bit alleviated by the start of the theatre season. In today’s photo we have one of the theatre venues of Bucharest, the National Theatre, a stocky building located in December 21st 1989 Square. It was built in 1973 after plans by a group of Romanian architects. The old building of the National Theater was destroyed during the WWII and that site is now occupied by a hotel. Originally the building had a different facade, but in 1984 it was remodeled and got its present massive shape. The theatre has four performance halls.

The National Theater is named after the Romanian playwright and short-story writer Ion Luca Caragiale (1852-1912). His plays made fun of the politics and politicians and of the Romanian society of that day. For example the play that is considered to be his masterpiece, “A Lost Letter”, written in 1884, describes a provincial government election won by a blackmailer. It’s amazing how his works have the same power today as they did a century ago. Not only that, but I saw one of his plays being performed in California and I was surprized to see how the American public of today can relate to his story written in 1880.

4 Responses to “The National Theatre”