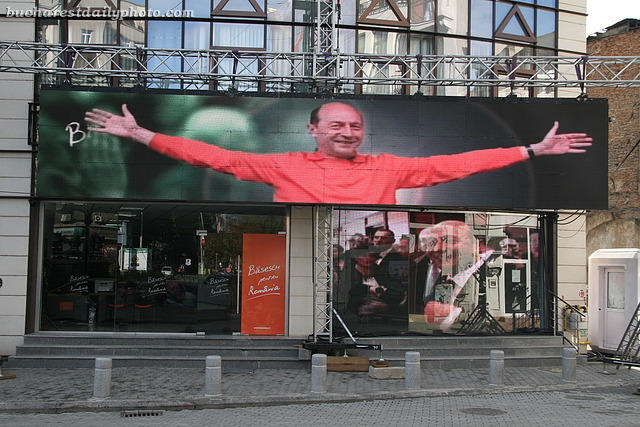 These days Romania’s enjoying the full swing of an electoral campaign. Presidential elections will be held on November 22nd together with a referendum concerning the reducing the number of elected parliamentarians from 471 to 300 and moving from a two chamber system to a unicameral one given that the powers of the two houses are nowadays largely similar and the bicameral system has led to legislative gridlock in the past. There are 12 candidates for the seat of president but only three of them have real chances. It is not expected that anyone will get majority in the first round and we’ll probably have to go to vote again on December 6th. The city is full of advertisement related to the campaign. The smiling guy that appears in my photograph is the incumbent, our current president, Traian Băsescu, who is running for reelection. A former ship captain, Minister of Transport and Mayor of Bucharest, he is a somewhat controversial figure in Romania. People either love him or hate his guts and nobody remains indifferent. The opponent closest in the polls is the Social Democratic Party candidate, Mircea Geoană, former Foreign Minister of Romania and former ambassador to the United States.