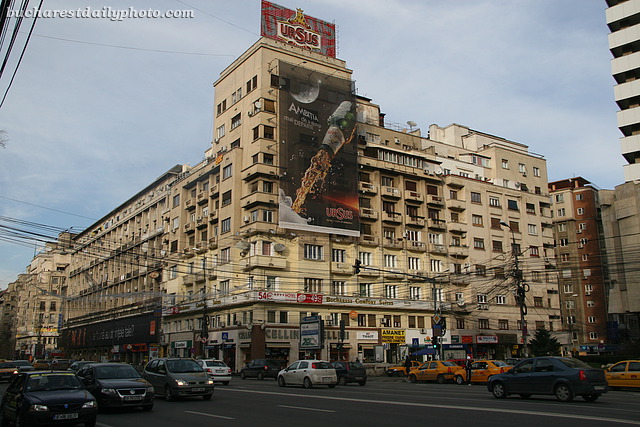 I confess to be a fan of between the war architecture. I think you guessed that already, since this series has reached part 6. Modernist, Bauhaus, Art Deco, I like all the flavors and shapes. Maybe that’s why I like strolling on Boulevards Bălcescu and Magheru, despite the fact that they get the most traffic in Bucharest. Many of the buildings that line these boulevards were built in the 20s and 30s and from my point of view they are an architectural feast. I’ve already showed you one example of a Magheru building back in December and today’s photograph shows another one, “Creditul Minier” apartment building (Blocul Creditul Minier in Romanian), located on the corner of Bălcescu Bouvelard and Batiştei Street. It was built in 1937 by architect State Baloşin. I like its higher corner element and the way it is integrated in the structure. I also like its Art Deco balconies. For almost half a year I’ve tried to capture this building without a banner, but that proved to be mission impossible.

7 Responses to “Bucharest’s between the wars architecture – Part 6”