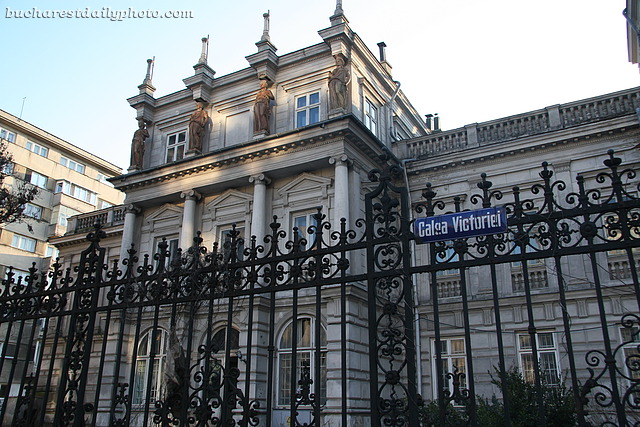 The Victory Avenue (Calea Victoriei in Romanian) is one of Bucharest’s most important avenues. It was built as a main road in 1692 under orders from Constantin Brâncoveanu who needed a road to link his palace at Mogoşoaia with the Old Court. In the beginning the street was known as Podul Mogoşoaia aka Mogoşoaia Bridge, because it was paved with wood. In 1878, after the Romanian War of Independence, the victorious Romanian army entered the capital and marched along this avenue, and that’s when the name changed to Victory Avenue. Between the two world wars Calea Victoriei became one of the most fashionable streets of the capital. Following this avenue from United Nations Square (Piaţa Naţiunilor Unite in Romanian) to Victory Square (Piaţa Victoriei in Romanian) you’ll find some of the most beautiful buildings in Bucharest. Among these are the Naţional History Museum, the National Savings Bank or CEC building, the National Military Circle, Capşa House, the Art Deco Telephone Palace, the Creţulescu Church, the Central University Library, the Romanian Athenaeum, the Royal Palace which today houses the National Art Museum and the Cantacuzino Palace. I’ve already posted photos of some of these buildings on this blog and you can see them by following the “Victory Road” label. Today’s photo shows the classical facade of another beautiful building lining Calea Victoriei, Ştirbei Palace. It was built in 1833-1835 after plans by architect Michel Sanjouand.

5 Responses to “The Victory Avenue”