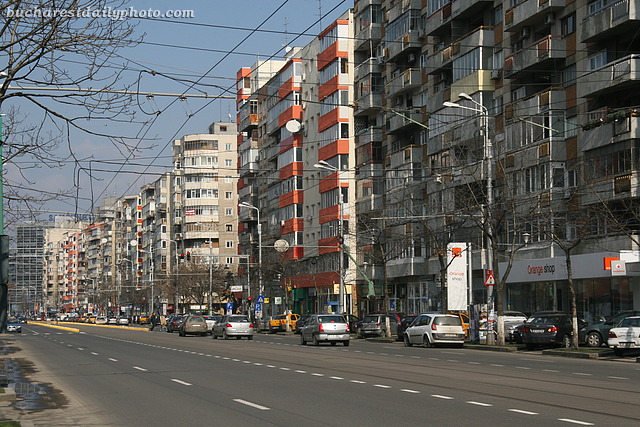 It’s been a while since I posted a photo showing the “other face of Bucharest” 🙂 respectively the tenement blocks of the communist times. The eight floors high ones, located on Calea Moşilor, which you can see in today’s photo, are pretty typical. Most of the citizens of Bucharest live in this kind of housing. The apartments inside can have 1, 2, 3 or 4 rooms and they are generally measuring from 30 to 70 square meters (322 to 753 square feet). The heating and hot water are in the vast majority centrally controlled and a perpetual source of problems. Despite their drab look, a four room apartment can go for more than 100.000 euros, because of the shortage of housing in Bucharest. The cheaper apartments are on the ground floor because of less lighting and fear of break ins and on the last floor because of the fears regarding the bad insulation of the terrace. The citizens of Bucharest also tend to favor buying apartments in newer buildings due to the fact that Bucharest lies in an seismic area and a newer building means less structural damage from the previous earthquakes. These days there’s a program to redo the outside insulation of the buildings with the state paying partially for the costs; the brightly striped buildings in the picture have probably just been re-insulated.

6 Responses to “The communist apartments”