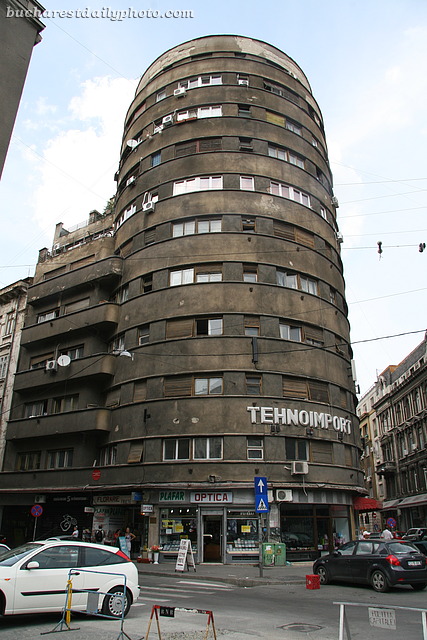 Many first-class modernist and Art-Deco buildings were erected in Bucharest between 1920 and the beginning of the WWII. Among them, this cylindrical tower on Doamnei Street designed by architect H. Stern in 1935. You don’t get to see many buildings like this one and that is why I like it despite its shabby look and dire need for renovation. Unfortunately the red dot at the base of the building tells us that the tower is most likely doomed. The red dot reads “This building has been appraised by technical expertise to fall within seismic risk class I”. I don’t know if you are aware but Romania (especially its southern part) lies in an earthquake area. The last big earthquake was in 1977. It had a magnitude of 7.2 and it killed around 1600 people and about 35.000 buildings were damaged.The buildings appraised as class I present a major risk of collapse in case of an earthquake of magnitude 7 of higher on Richter scale. Since more than 30 years have passed since the last big one, people are whispering that there’s time for the next one. Every year some fortune teller predicts the day the next big earthquake will take place and many people living in buildings like the one in today’s photo take to the streets for the day “just in case”.

7 Responses to “Beware of the red dot”